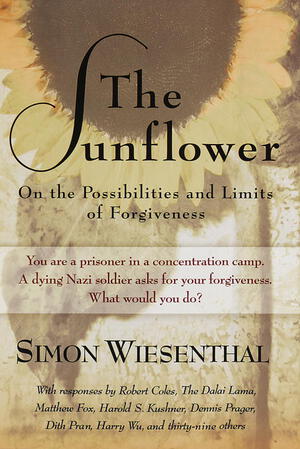 Put yourself in the position of a prisoner in a concentration camp. A dying Nazi soldier asks for your forgiveness. What would you do? In The Sunflower, Simon Wiesenthal raises that question for readers to wrestle with, and they have been passionately doing so ever since.

As a young man imprisoned in a Nazi concentration camp, Wiesenthal was taken one day from his labor brigade to a hospital at the request of Karl, a mortally wounded Nazi soldier. Tormented by the crimes in which he had participated, including the murder of a family with a small child, the SS man wanted to confess to--and if possible, receive absolution from--a Jew. Wiesenthal, left the room in silence, but remained intrigued by the issues the man's request raised about the limits and possibilities of forgiveness. Must we, can we, forgive the repentant criminal, no matter how heinous the crime? Can we forgive crimes committed against others? What do we owe the victims? Twenty-five years after the Holocaust, Wiesenthal asked leading intellectuals what they would have done in his place. Collected into one volume, their responses became one of the most enduring documents of Holocaust literature and a touchstone of interfaith dialogue. This new edition of The Sunflower, issued in honor of the twentieth anniversary of it's publication in the United States, brings together the voices of a new generation of thinkers, including Robert Coles, Matthew Fox, Arthur Hertzberg, Harold Kushner, Dith Pran, the Dalai Lama, Dennis Prager, Tzvetan Todorov, and Harry Wu. Their answers reflect the teachings of their diverse beliefs, and remind us that Wiesenthal's question is not limited only to events of the past.